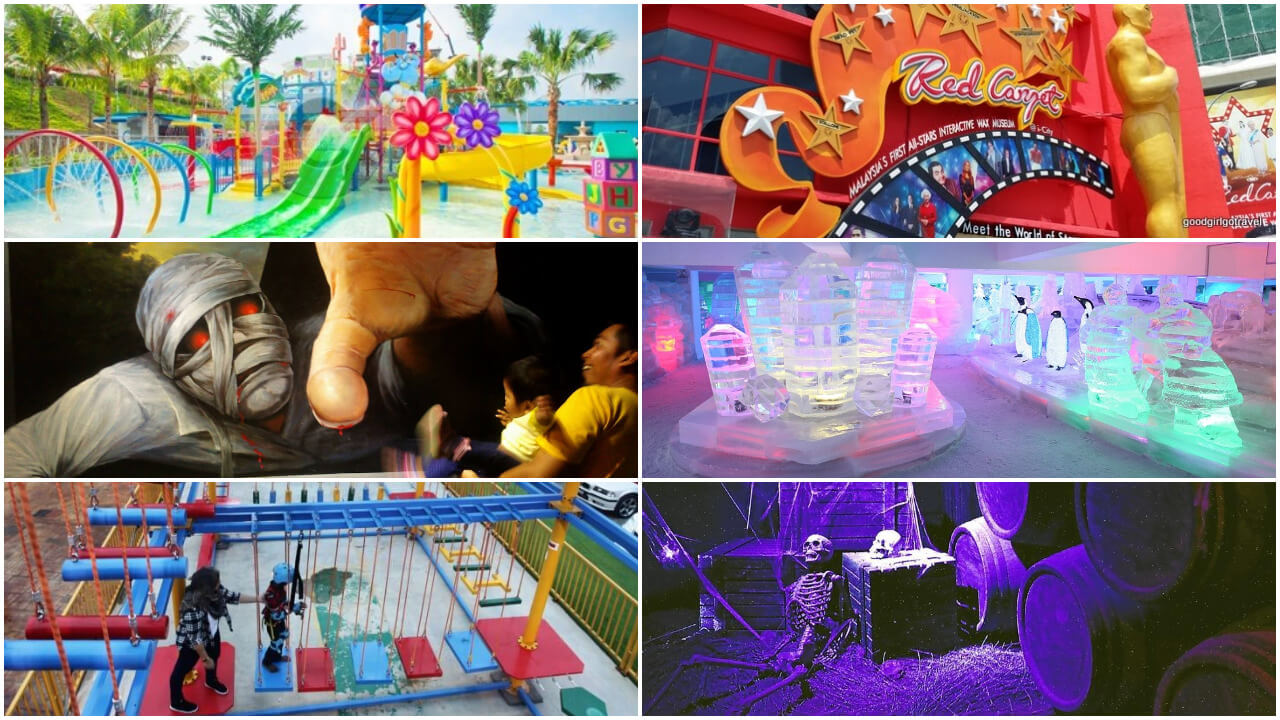 Located in Selangor, as its name suggests, this one-of-a-kind attraction presents a lights cape lighted with over a million led lights. It features out of doors amusement park rides set in a very ‘forest’ of maples and pines of jewel-toned brightness. Among the rides area unit the Super swing, a Spacewalk and therefore the ancient favorite — an omnibus carousel. Town of Digital Lights at i-City could be a Malaysian Night touristy highlight.

This is a sample video for i-city WaterWorld:

The first in South East Asia, this 50,000sqft-frozen atmosphere features a hundred loads of ice sculptures formed by a team comprising thirty of the simplest sculptors from Harbin, China. Climate-controlled at below five degrees Celsius, with 100mm of snow underfoot, Snowalk provides associate degree unforgettable Arctic expertise particularly for guests from the hotter climes. It additionally features a play zone for fun activities like snowman making, ice sliding and tobogganing. Costing RM ten million, this entertainment center accommodates up to 800 visitors.

Sprawled over a 10-acre site, WaterWorld at i-City opened its doors to welcome guests in November 2012. That includes water rides ranging from tame to wild in their propensity to supply thrills, Water World at i-City offers hours of aquatic fun for the complete family. The rides embody the large Jacuzzi, Spiral and Rainbow slides, a Children’s adventure Pool, river adventure through led-lit grottoes and a Wave pool with a large LED screen.

The most popular, however, is that the Tornado Ride. The first within the Association of Southeast Asian Nations region ASEAN, it’s the final word adrenalin rush. From the launch tower, a steep 160ft water tunnel sends four tube-raft riders hurtling towards a 7-storey high funnel tilted at a forty-five degree angle. The rafts oscillate four to 6 times up either side of the funnel producing a sensation of weightlessness. Once gravity reasserts itself, the rafts then flow through the funnel bottleneck before splashing down into the 1350sqft landing pool.

Designed for the family, there is abundant fun to be had at this themed attraction. There are a unit arcade games and rides for tots and youths, a 5D theatre that expands the cinematic experience, a Trick Art museum, A House of Horror and an interactive All-Star wax museum.

Based on the traditional art of trompe l’oeil, the exhibits tease the mind with optical illusions created by the clever rendering of shadows and subjects that reach on the far side the image frame. 5 art themes — Masterpieces, Egyptian, Marine Life, animal kingdom and trendy Classics — are featured, housed among 8,000sqft of show space on 2 floors. Here, visitors are inspired to have fun posing for photos with the exhibits.

Ghosts, ghouls, spectres and different denizens of the dark inhabit this 15,000sqft-haunted house. Combining mechatronics (machine and electronics), Night Art and live performance, nightmares are delivered to life to supply spine-chilling entertainment for those brave enough to venture among. There are spooky surprises at each flip with the eerie atmosphere heightened by special sound and visual effects.

Opened in August 2013, this is yet another ‘first’ to be introduced by i-City. an interactive waxwork museum, the Red Carpet showcases an All-Star solid bringing along glamour and glitz, power and Politics, the strange and fantastic in 30,000sqft of Oscar Awards setting. The RM twenty five million Red Carpet could be a Visit Malaysia Year 2014 (VMY) highlight.

All a hundred exhibits are drawn from world icons and personalities on six themes, specifically World Icons, Celebrities, Sports Stars, World Book of Records, A11-Star cafe and Interactive — some of that are sound and motion automatic.

Here, too, visitors are welcome to step up close, to look at and touch the wax figures. You’ll witness and marvel at the uncanny resemblance in skin tones and texture of your idols while the interactive component allows visitors to party with them.